Samsung GALAXY Gear keeps you connected even when you have your hands full. So we invited notorious French free-climber Alain ‘Spiderman’ Robert to take some snaps, chat with media, and send a few texts; as he climbed the 40-storey Metropolis building – using the GALAXY Gear and some chalk to help his grip.

The campaign was created by Colenso’s experiential team to capture the imagination of the public and media while demonstrating that with GALAXY Gear you don’t have to let go to use your mobile. The stunt was set up so that the whole climb was captured on camera from multiple perspectives. The content was then shared via social media and with mainstream media to generate PR coverage. 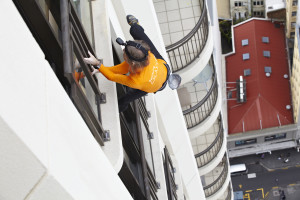